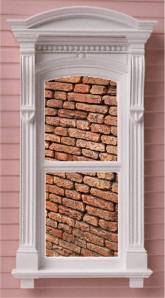 Tony Watkin’s Thinking it through (2012)

Thinking it Through is a collection of columns architect and designer Tony Watkins wrote in the 1980’s and 1990’s. So far, I’ve only read a few of them and I think it will be slow going. Not in a bad way – it’s just that every few lines I come across an idea that makes me go “yeah, I have to write that down.”

If I was the kind of person who writes in their books, this one would be covered in scrawled margin notes already.

What I liked about this line wasn’t just the very simple, no-nonsense point about form and function, but that it brought to mind an extraordinarily strong memory visual memory. A memory quite literally of a window that should never have been built – or at least built in a different position.

In the late 1970’s,  I lived next door to a family who had an “architect-designed home.” Actually, since I’d grown up living in State houses, it could be said that I had also lived in “architect-designed homes.” But since mine were rented from the Government and the design was pretty standard across thousands of houses, the people next door were a bit special since they were amongst the relatively few families in New Zealand who had commissioned an architect to design a house specifically for them.

The reason Tony Watkins’ article made me think about the house next door was that its kitchen faced ours. The houses, although quite close together, were separated by a rather lovely garden of native trees and shrubs. Because of the proximity, I spent a lot of time seeing the “lady of the house” doing the dishes. Actually, what I saw were her torso and hands. That’s because the kitchen window in her “architect-designed house” was set so low that only quite small children could have seen out of it while they were standing at the sink.

So for several years I watched headless bodies doing dishes, getting glasses of water, filling the kettle, etc and all the time those headless bodies were looking at the wall above the window instead of their beautiful garden.

I’ve often wondered why the house was built with such a window. Was it a mis-calculation by the builder, or was it actually a design feature – deliberately put there by the architect. Surely if the builder had made a mistake, it would have been rectified. I guess I’ll never know, since lacking the facility to make eye-contact with the neigbours, I didn’t really get to know them.

I’m slowly working my way through Thinking it Through. I’m enjoying the intelligent, insightful text and Haruhiko Sameshima‘s gorgeous photographs; frequently reaching for my notebook to jot things down, and slowly developing my architectural world-view.

I believe that in essence, design is being human made manifest in hard materials. Design should exhibit the same characteristics we want in humans; compassion, fairness, love, beauty, humour. Buildings should be friends – or at least fond acquaintances.

I’ve used to wonder what was on the wall above my neighbour’s kitchen window. A picture of a garden perhaps?