Women’s Refuge helps over 20,000 women and children in New Zealand each year who are affected by domestic violence. Yellow Belle marks a new phase in Refuge’s history – providing on-going income that will allow the organisation to do even more.

It was lovely to be part of the launch celebration; to be surrounded by strong, passionate women who give so much of themselves to bring about change for the better.

This post was written for Wordless Wednesday. Here are some others that I’ve enjoyed:

Wordless Wednesday: A Walk in the Park 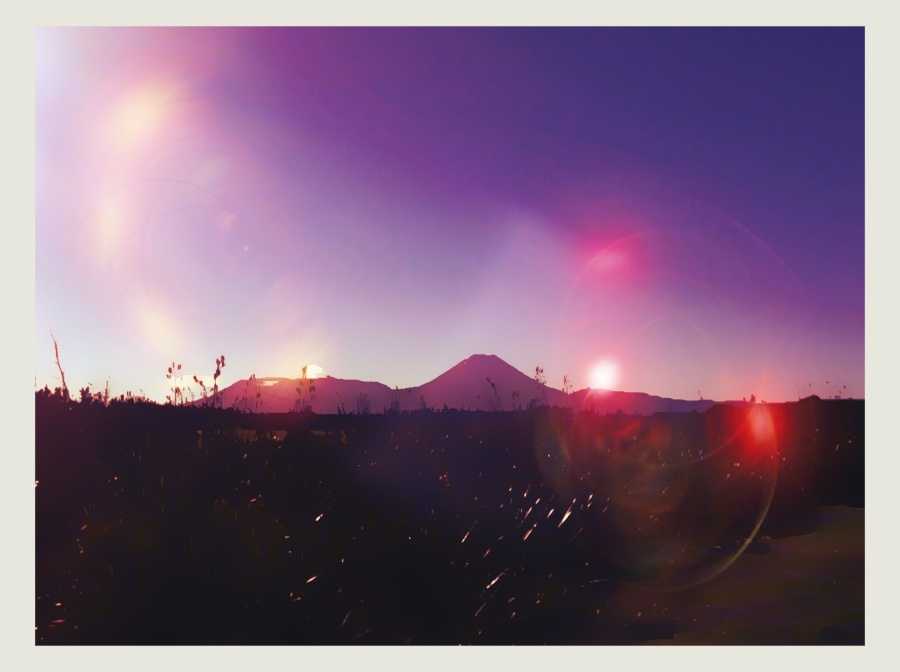 Twilight on the Waikato River at Mercer. Photo: Su Leslie, 2014

It was a lovely few days away. Too much rain at first, but two days of big skies and sunshine on the mountains. A visit to my dad and lots of time to reflect and relax.

Six word Saturday is a blogging prompt from Cate at Show my Face. Here are some other blogger’s Saturday’s that I’ve enjoyed:

Have You Ever Seen a Unicorn?

April 25th in ANZAC Day here in New Zealand and Australia; our most important national day of remembrance, for all Australians and New Zealanders

“who served and died in all wars, conflicts, and peacekeeping operations” and “the contribution and suffering of all those who have served.”

ANZAC stands for Australian and New Zealand Army Corps; a term – and an entity – that came into existence in World War One. The ANZACs first major engagement was the ill-fated and disastrous attempt to capture the Gallipoli Peninsula, in what is now Turkey, from troops of the Ottoman Empire – with whom the British Empire was at war.

The Gallipoli offensive – involving troops from Britain, India, Canada and France as well as Australia and New Zealand – began at dawn on April 25, 1915 with thousands of soldiers landing along the rugged, hilly coast of the peninsula. The objective was to charge Turkish posts (which unsurprisingly were on high ground), and capture key points along the landmass. That offensive, and each subsequent attack over the following EIGHT months, failed to capture significant ground. The defeated and exhausted remnants of the Allied expeditionary force were finally evacuated in January 1916.

Around 120,000 troops lost their lives during the Gallipoli Campaign (Allies and Turks); 8709 of them were Australian; 2721 were Kiwis. That may not sound like a lot, but remember that New Zealand’s total population at that time was only about a million people.

ANZAC troops fought and suffered terrible casualties in all the major WWI European battles too, but Gallipoli shaped our national psyches like no other.

What ANZAC Day means to me

I’m a child of the ’60s, a mother, an internationalist rather than a patriot. Yet I commemorate ANZAC Day, not out of glorification of war, but because it is such a stark reminder of human suffering. The Allies failed at Gallipoli; and in sending wave after wave of soldiers ashore, their commanders killed and maimed almost 200,000 mainly young men. ANZAC Day reminds us, not of boys-own, gung-ho, biff, pow, comic-book war, but of mud and blood and fear and misery. And in that, it has become a force for peace. 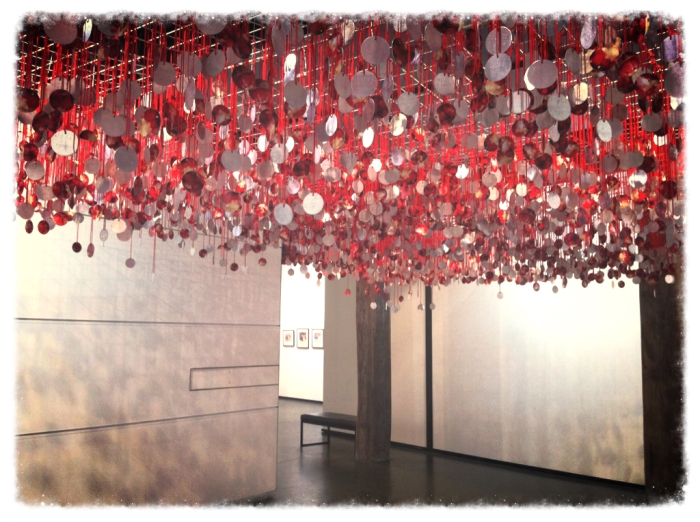 Turtle Donna Sarten, ‘Strange Fruit’. Academy of Fine Arts, Wellington, 2013. The ‘strange fruit’ of the title is 3890 military dog tags – one for each of the New Zealanders who served in Vietnam between 1964 and 1972. Vietnam was a war people wanted to forget, yet the suffering of veterans is immense and ongoing. I’ve written more about this work here. Photo: Su Leslie

Art makes some of the clearest and most powerful statements about the world. Art which draws on, and references the military can be particularly powerful.

NZ Sculpture OnShore is a biennial sculpture exhibition that raises money for Women’s Refuge. It is held at Fort Takapuna, a Historic Reserve that was once part of New Zealand’s coastal defense and has a long association with the military. In this blog post  I’ve looked at some of the artistic responses to the site over the last few exhibitions.

To me, these are beautiful and poignant works. I’d like to know what you think.

For a girl from the coast, the sight of snow on mountains never fails to thrill.

Here are some other Wordless Wednesday’s I’ve liked:

Wordless Wednesday – here there be dragons

The Fourth and Final

An alternative to paint: the walls of this cafe in Pukekohe were lined with old album covers, including one by the Red Army Ensemble. Photo: Su Leslie 2014

Unwell, I’m sleeping badly and dreaming much. Last night I found myself in this stand of trees looking for protection against the people who want to take my child away from me. A recurrent dream for me during the boy-child’s early years when I suffered from post-natal depression, I wonder why it returns now (when he’s 16)? Photo: Su Leslie, 2013. Edited with Pixlr Express

Here are some other Wordless Wednesday’s I’ve enjoyed:

I just love the way old table and standard lamps have been re purposed in the Northern Steamship Co. Brew Bar in Britomart, Auckland.  Seeing them for the first time definitely provided a random moment of delight!

This post was written for Meghan’s Random Moments of Delight Challenge at Firebonnet.com.

Sometimes a moment is so perfect, it seems as if nothing could ever capture the feeling, the mood, the memory. But now that so  many of us have constant 24-hour access to a camera in our phones, tablets, etc, it is difficult not to try.

On Sunday I woke early and went to the beach. It was quiet, but not deserted. The world was suffused with a golden light. I photographed the sun rising alongside Rangitoto Island, not really expecting great results.

I was pleasantly surprised. 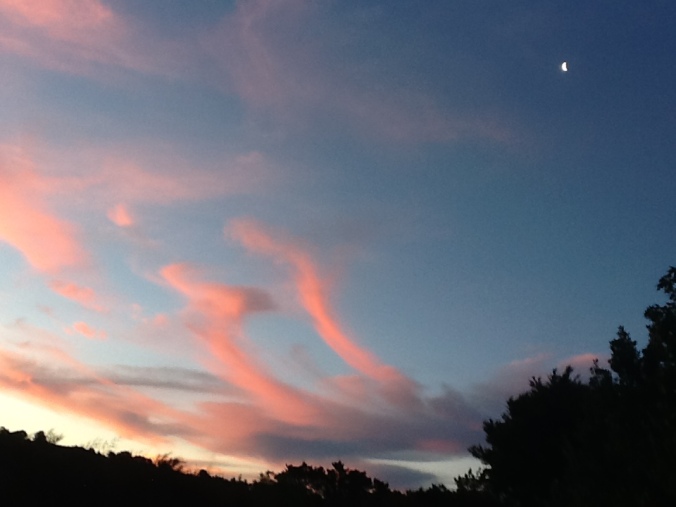 After such a wonderful start, how could Sunday in Auckland be anything but glorious? It was the first day after the end of daylight saving and the sun set as we were making dinner. I only had the iPad to hand – and these were the results. 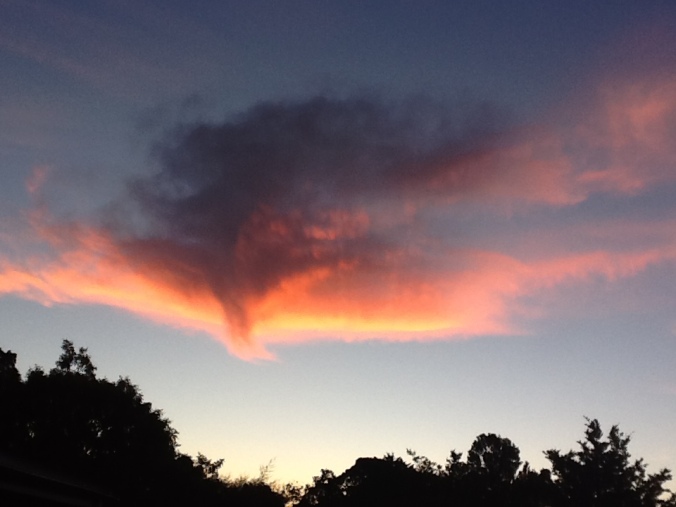 Viewers can look at these photos and enjoy the light and colours. They will almost certainly remind you of sunrises and sunsets you have seen and photographed. When I look at these I see moments of happiness, of stillness, of contentment.

Non-SLR digital devices allow us to create endless examples of such an aide-memoire. The trick now is to filter and select so that we preserve only those which really speak to us, and not allow ourselves to be overwhelmed by the volume of images we have created.

This post was written for Sally’s Phoneography and Non-SLR Digital Devices Photo Challenge at Lens and Pens by Sally. Here are some other posts on this week’s theme “nature”: 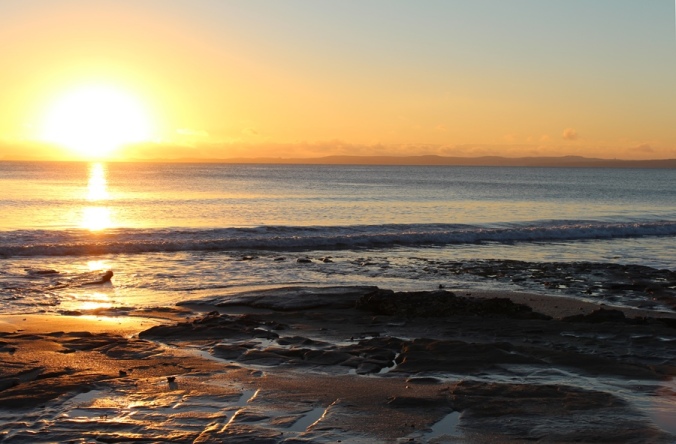 Another dawn or the end of the world? Sunrise at Campbells Bay, Auckland looks like a cinematic H-bomb. Photo: Su Leslie, 2014

Six Word Saturday is a blogging prompt from showmyface.com. Here are some other posts I’ve enjoyed:

Dressed for Weather or for Fashion?