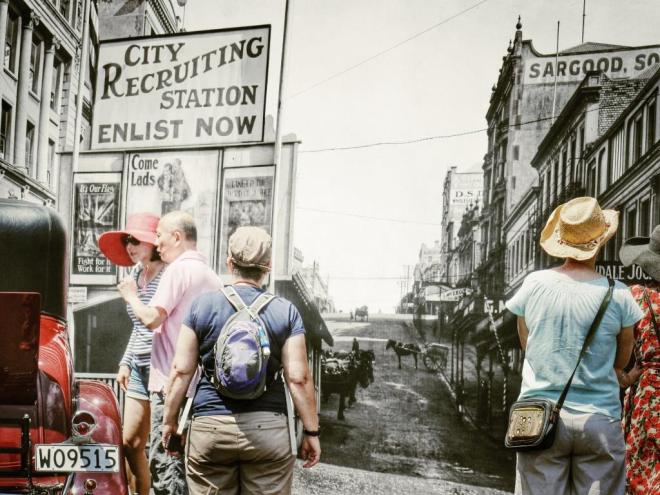 It’s 175 years since the city of Auckland was established, and so our Anniversary Day celebration back in January was pretty special. One of the things I really enjoyed was a display of  large-scale photos from the Council archive showing how the city used to look. I have posted a couple of these images before, but I thought they were so appropriate for this week’s travel theme,  Old Fashioned, at Where’s my Backpack that I’ve re-edited and re-used them.

Old-fashioned oratory. A giant photo of Sir John Logan Campbell, one of the city’s founding fathers.  I wonder what he would have made of the casual dress code of modern New Zealanders? Photo: Su Leslie, 2015

Cars have changed a lot in the last 80 or so years, but the Auckland Town Hall looks pretty much the same. Photo: Su Leslie, 2015

What I hoped was just a snuffle turned out to be much more serious and the vet couldn’t offer any hope of improvement.  After almost 15 years with us, Sirus’s life ended peacefully in my arms. He is missed. Photo: Su Leslie.

Past it’s best perhaps, but I find a subtle beauty in this decaying rose. Photo: Su Leslie, 2015.

We live in a world that subtly (and not so subtly) demands “perfection”. From the Photoshop’d bodies of celebrities to the fruit and vegetables on display in supermarkets, advertising tells us we can have rounder tomatoes, straighter carrots, glossier hair, slimmer thighs, whiter teeth — if only we’ll part with our money. It’s an insidious, dangerous, repugnant ideology that leads to mountains of wasted food and irrevocably damaged  lives.

Not quick enough with the remote control last night I watched — in utter horror — the first couple of minutes of a television programme about people who willingly and repeatedly undergo expensive surgical procedures that modify their bodies to conform to some idea of beauty. Really, about two minutes was all I could take before I had to turn the set off. I looked at the Big T; he looked at me. We both wondered what sort of world we’ve found ourselves in.

Past it’s best perhaps, but I find a subtle beauty in this decaying rose. Photo: Su Leslie, 2015.

What does this have to do with photos of decaying roses you ask?

These are the flowers given to me recently by a friend. They were a rare treat; beautiful to look at, and as a gesture of our friendship. I’ve been loathe to throw them out.

Since last night’s brief encounter with the TV, I’ve been thinking a lot about beauty. The flowers in my bouquet were exquisite; soft, plump roses and snowy chrysanthemums amidst purple kale and glossy greenery. With age, they’ve become limp, and are browning around the edges. But the thing is, I still find them beautiful.  I still appreciate the folds and contours, and am fascinated with the appearance of new textures in the rose petals.

I’m not sure if  notions and standards of beauty in nature are universal to all human societies, but beauty in people is definitely a variable, culturally determined construct. By the standards of the culture I live in, I have never been considered beautiful in the way a bouquet of roses is. I’m “too short”, “too fat”, have a “big nose”, “dumpy legs” and “thin hair” (all phrases I’ve heard about myself). And at times I’ve anguished over my “failings”, but mainly –like so many other people — I’ve reached for another chocolate biscuit and got on with the business of living. I’ve found friends and lovers who are either blind to my faults, or find other things to like about me. And despite a whole bunch of new, age-related flaws that make it even less likely I’ll make it to the cover of Vogue, I’m comfortable in my (ample) skin. Even in the worst depths of my recent depression, when I was beating myself up over all sorts of things, I still managed to feel ok about my appearance.

I wish I could think of a cheerful, upbeat way to finish this post, but in truth I don’t feel upbeat. I feel fortunate to have grown up at a time when body modification meant getting your ears pierced or having a new hair-do –“perfection” wasn’t attainable so it was easier to accept ourselves. Now I worry about my son’s generation; increasingly aware of friends’ children who struggle constantly with negative body image, and quietly terrified for my own child.

So instead I’m offering Nick Cave’s Into My Arms; not upbeat, but one of the most beautiful songs about love and loving that I know.

This post was written for Sally D’s Mobile Photography Challenge at Lens and Pens by Sally. 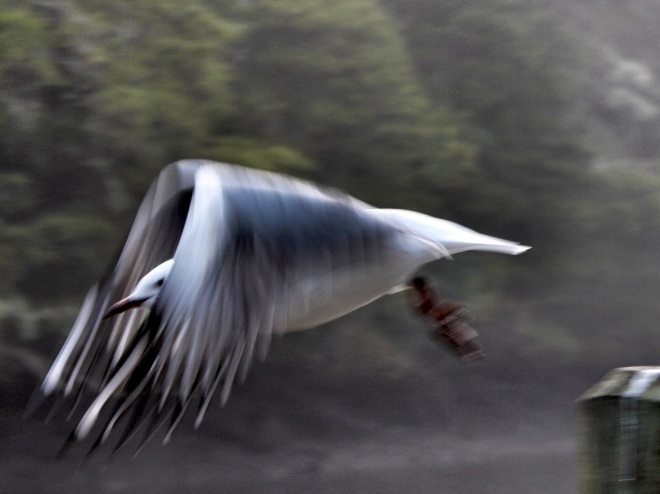 Taking off. Seen on an early morning walk by the Mahurangi River, Warkworth. Photo: Su Leslie

Generations of modernity. The Queen’s House,  the Old Royal Naval College, Greenwich, and behind them, the new buildings of London’s Docklands area. Photo: Su Leslie, 2015

When The Queen’s House (1) was built for the wife of King James I in 1619, it would have been considered radical, unusual, and modern in the extreme.

Designed by Inigo Jones — regarded as Britain’s first modern architect — it is the first building constructed in the UK that consciously followed the principles of classical architecture, inspired by the temples and other buildings of ancient Rome and Greece. The Queen’s House now sits alongside Christopher Wren’s Greenwich Hospital (2) (better known now as the Old Royal Naval College) with its baroque Painted Hall, and both co-exist with the modernist glass towers of London’s Docklands.

The interplay of the modern and the traditional-which-once-was-modern is all around us.

I love the giant ship-in-a-bottle created by artist Yinka Shonibare. Using a traditional craft form developed by nineteenth century sailors (3), Shonibare created a very modern work of art in his replica of  HMS Victory. This was the naval ship from which the British hero Admiral Lord Nelson fought the Battle of Trafalgar in 1805, and on which he died during that battle. The ship’s sails are made from fabric bearing colourful batik designs commonly found in West Africa. By using this fabric, Shonibare acknowledges Britain’s complex colonial past and contemporary issues of immigration, ethnic identity, and cultural appropriation. 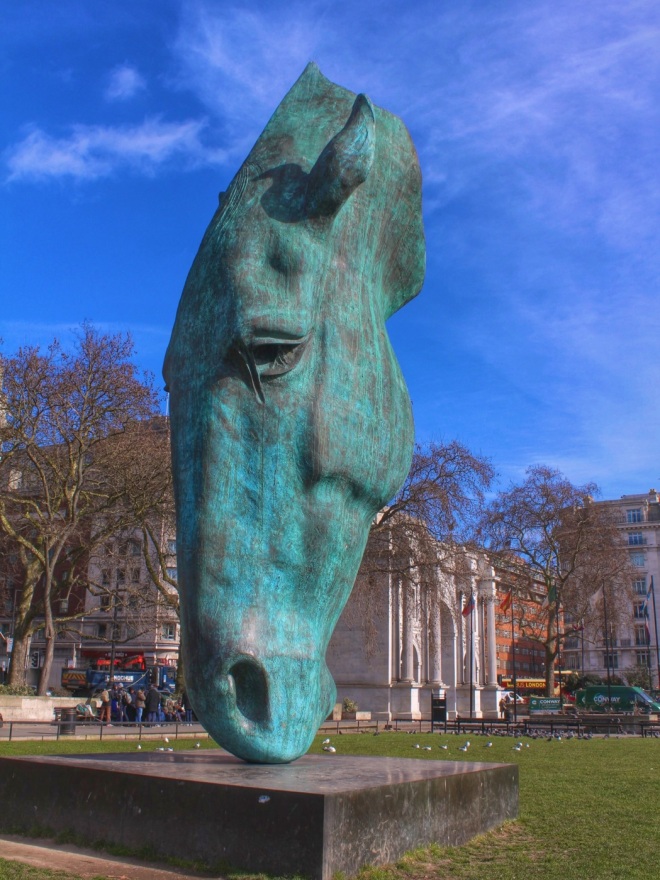 Bronze is a traditional sculptural medium, and horses a very traditional subject in art, but Nic Fiddian-Green‘s monumental, 10 metre high horse’s head at London’ Marble arch, is a thoroughly modern take on both form and subject. 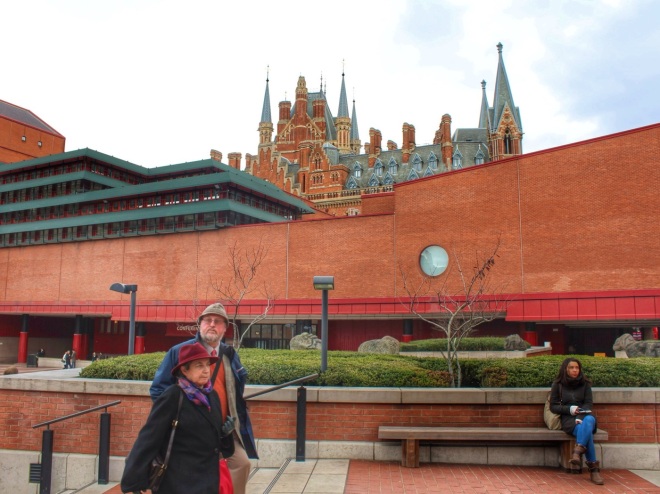 The modernist British Library, with the gothic-style St Pancras Hotel in the background. Photo: Su Leslie, 2015.

The British Library opened in 1998 on Euston Road, London. Designed by British architect Colin St John Wilson, it is the largest public building constructed in the UK in the 20th century. The project took 37 years to complete and was highly controversial, with frequent changes to the design, specification, budget — even a total change of location (4).

The building’s design has been described as minimalist, brutalist, Scandanavian modernist. The Prince of Wales — famous for his loathing of modern architecture — apparently described it as resembling an academy for secret police (4).

The British Library has, as a neighbour on Euston Road, the St Pancras Renaissance Hotel (formerly the Midland Grand Hotel). Designed by English Gothic revival architect George Gilbert Scott, the original hotel opened in 1873. It closed in 1935, but was extensively renovated and re-opened in 2011. (6)

The irony of Gothic Revival architecture is of course, that even when it was new, it was never modern.

This post was written for Ailsa’s Travel Theme at Where’s my Backpack. This week’s theme was modern.

(3) Ships in Bottles Association of America