A visit to the Wintergardens at the Auckland Domain last week (Daily Post Photo Challenge: Vibrant) was both relaxing and uplifting. Both the Temperate and Tropical glasshouses were bursting with well-tended, colourful plants.

The Wintergardens, designed by Auckland architects Gummer and Ford in a style much influenced by the work of Edward Lutyens and Gertrude Jekyll, were first opened in 1928 (1). Although renovations were carried out in the 1990s, the buildings definitely have an air of genteel decay.

As I was leaving, I noticed within the Tropical House plants pressed against the grimy, shabby windows, on which moss or mould seemed to be growing.

On one window, the impression was of an abstract painting, with the mould growth somehow blending into the foliage behind. 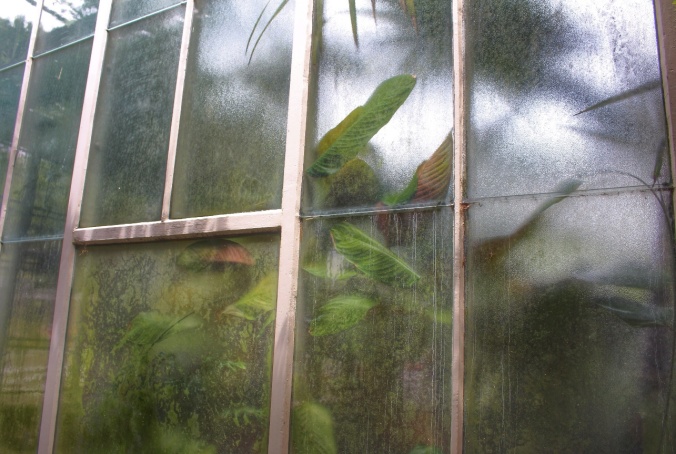 Stepping back, the scene reminded me of a zoo. A plant zoo if you like; built to contain nature for the pleasure of humans. There is no doubt that people (myself included) derive enormous joy from time spent in the glasshouses; nor any doubt that those who tend the plants do so with great skill and care.

But in a small moment of contemplation; standing outside the building looking in, I couldn’t help but feel some sadness at the human impulse to capture nature and to use our considerable intelligence and skill to maintain species of life in artificial environments made to simulate their own, in order that we may enjoy those species on our own terms.

This post was written for Sally D’s Mobile Photography Challenge at Lens and Pens by Sally. This week’s theme is nature.