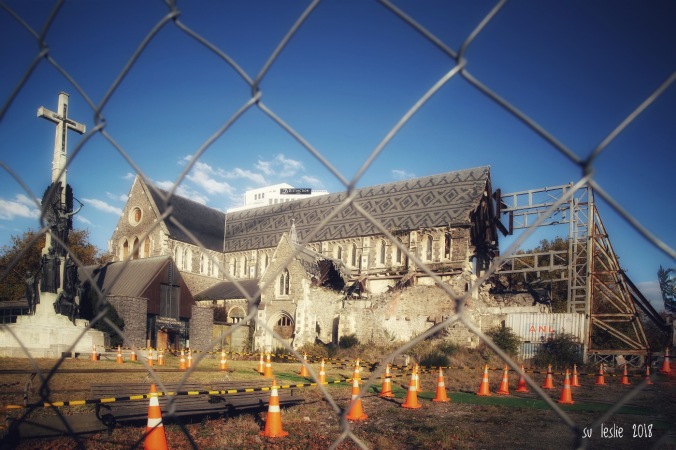 Christchurch Cathedral has a long history of “unlikely.”

It was first planned (and land set aside) in 1850, the year in which the first four ships carrying European settlers began to arrive in the area. (1)

It was a hugely ambitious project for a city that existed largely on paper, and it took a decade for plans to be drawn up (by British architect George Gilbert Scott, who never actually visited the site). Scott’s original plan was for a wooden church in his signature Gothic Revival style, but the then Bishop of Christchurch, Henry Harper, wanted a stone building. Revised plans were drawn and the cornerstone was laid in December 1864.

Lack of money — hardly surprising in a settlement of less than 1000 European settlers — held the project up for almost another decade, and it must have seemed unlikely that fledgling Christchurch would ever get a cathedral.

Christchurch Cathedral was consecrated 1881, and finally completed in 1904. (2) 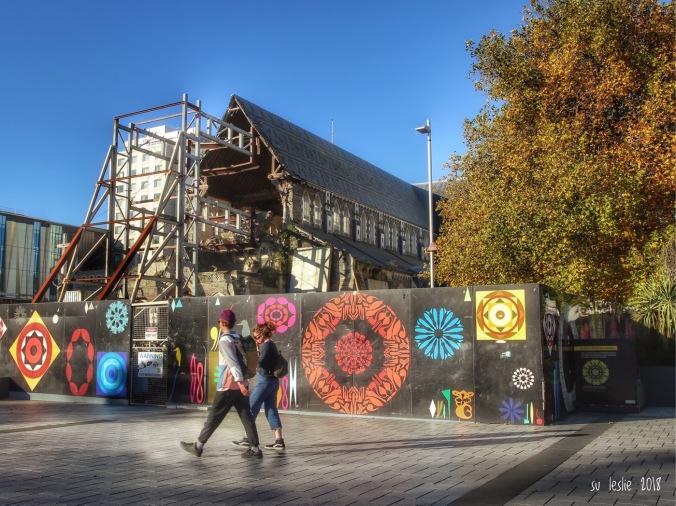 Christchurch Cathedral, shored up after the spire and Rose Window collapsed during the 2011 earthquakes. Image: Su Leslie, 2018

But New Zealand is not called “the shaky isles” for nothing, and earthquakes have repeatedly damaged the building — beginning in 1881, within a month on consecration.

During the terrible period between September 2010 and December 2011 when the Christchurch area suffered repeated, large-scale (and fatal) quakes, damage was so extensive that the cathedral had to be completely abandoned.

The February 2011 quake, which claimed 185 lives, completely destroyed the church spire and initially there were fears that up to 20 people may have been inside at the time (it was a tourist attraction). Thankfully, that was not the case.

Since 2011, there has been an on-going battle over the future of the cathedral — between the church which wanted to demolish it, and heritage groups arguing the building is an important part of the city’s heritage and should be preserved.

For a long time it’s seemed unlikely that Christchurch Cathedral would be re-built. But in September 2017, after intervention from the New Zealand government, the uncertainty ended and it was announced that the cathedral will be re-instated. (2)

As an aside: two separate lines of the Big T’s ancestors arrived in New Zealand on the fourth of those ships, the Cressy, in December 1850.