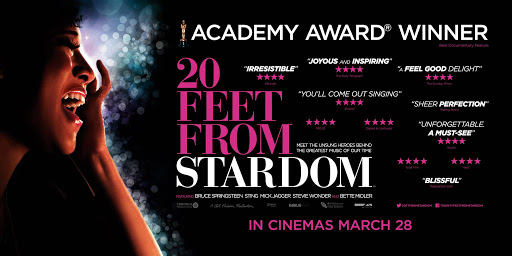 Poster, 20 Feet From Stardom. Image from The Cocoa Diaries

Strip out the backing vocals from rock, pop and R&B music and you lose much of its depth and richness. And yet, how many of us can name the singers (mainly women) who perform on our favourite songs?

20 Feet From Stardom is a 2013 documentary that explores the lives and careers of some of the music industry’s most prolific backing-singers. We may not recognise the names — Merry Clayton, Lisa Fischer (who’ve both sung Gimme Shelter with Mick Jagger), Judith Hill,  Claudia Lennear, or Darlene Love — but we recognise their voices, and when the spotlight is upon them, we understand their genius.

I love this movie. It doesn’t flinch from the harsh realities of what it means to be in the background — vital to, but often unacknowledged in — moments of musical magic and history-making. At the same time, it is incredibly joyous. These women love to sing and the film gives them voice.

20 Feet From Stardom was a huge box-office success and won the 2014 Oscar for Best Feature Documentary. As a result, some of its leading ladies have been propelled at least a few more of those 20 feet to stardom.

You can see the official trailer here:

And if you’re interested in knowing more about the making of the film, this interview with Darlene Love, Lisa Fischer, Merry Clayton and the film’s director Morgan Neville, is really interesting.

Sarah at Art Expedition, and Darren, The Arty Plantsman have initiated this great new blogging project. You can find out more and see their chosen films for the week by visiting Darren’s and Sarah’s latest posts.