Six Word Saturday, hosted by Debbie at Travel with Intent

I guess it had to happen! Friday seems to have become baking day, and there are more flours than flowers in my life at the moment.

I think I’m getting there.

Keeping a sourdough starter healthy involves feeding it regularly, so inevitably you generate spare starter. Turns out, you can actually use it to replace some of the flour/liquid in other recipes, and it makes really good crackers. I use rye flour, partly for the taste and partly because I bought a really big bag of it.

The key ingredient in sourdough baking is time, and I figure if I’m going to be in the kitchen all day, I may as well experiment. This one involves organic whole grain wheat flour (90%) plus 10% organic rye flour, with a porridge of toasted oats and buckwheat folded in for texture. It’s still too hot to cut, so you’ll have to wait to find out if it’s any good. 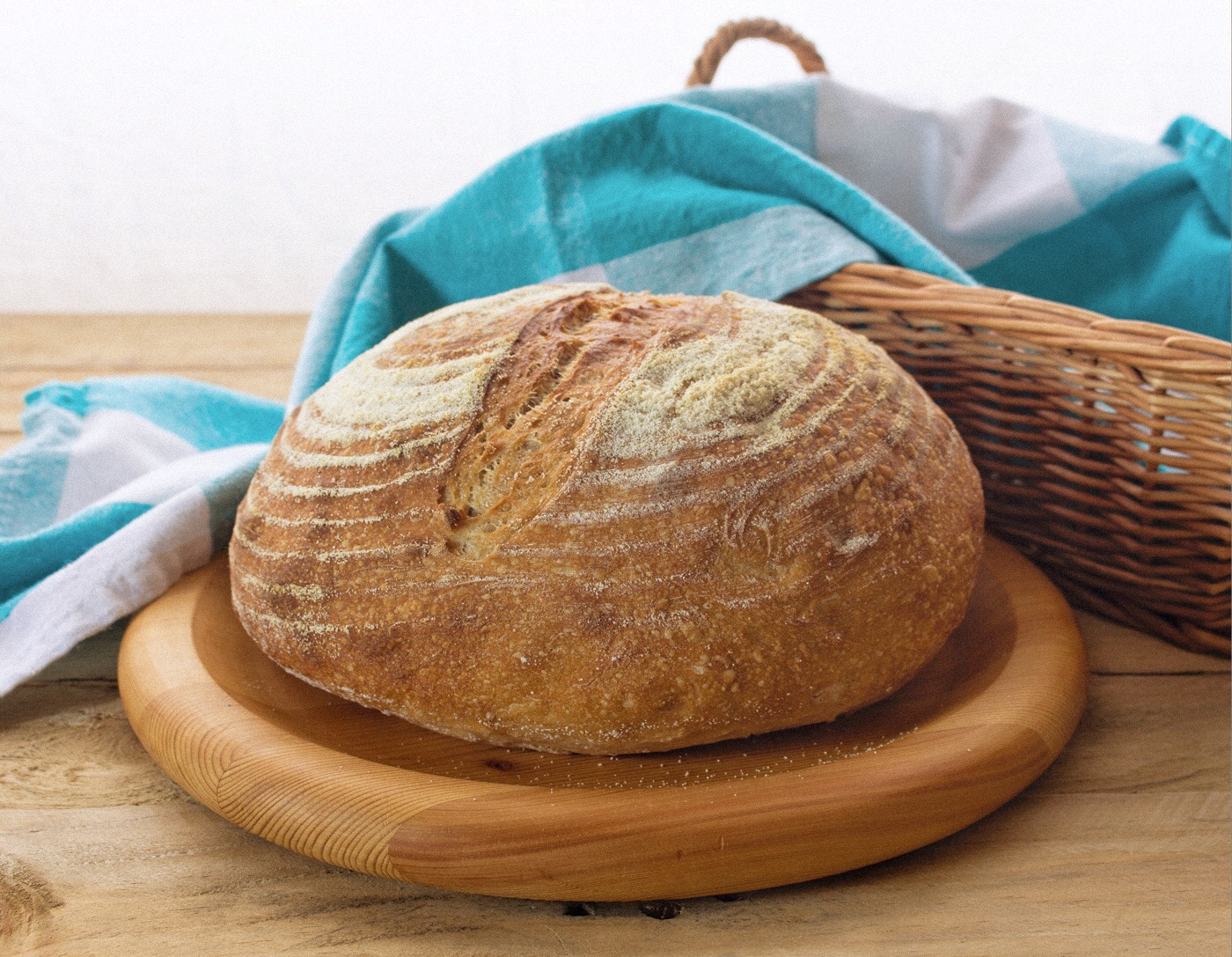 “Photographs are only able to speak in the past tense.”
– Ryūji Miyamoto, photographer

I’m so happy with the texture of my newly-baked loaf. Held up to the light, you can see the little gas pockets that made it light and airy.

One Word Sunday | light. Hosted by Debbie at Travel with Intent

In an extremely dreary month, I resorted to buying cut flowers to inject a little colour. Image: Su Leslie 2019

August is often a month in which I feel like hibernating. This year, with rain every day (yep, actually every single day), cold winds and heavy grey skies, I really haven’t felt  like venturing far from home. I know I’ve been busy at home — I’m just not quite sure what I’ve been busy doing.

My photos offer a few clues. 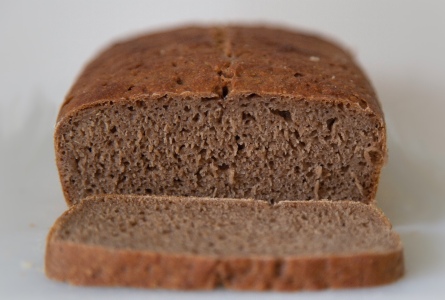 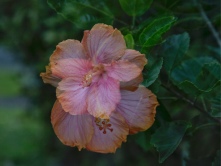 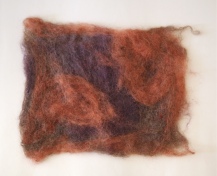 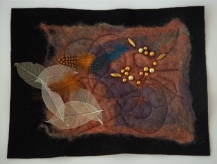 Felt-making for beginners; the reminder that I can only get better. Su Leslie 2019

Before and after: dining chair refurb project. Su Leslie 2019

There has been a lot of baking this month; mostly sourdough-based. I’ve been making a sourdough wholewheat bread for a few years, and was getting quite reliably good results until a few months ago. My most recent loaves aren’t developing the gluten properly, and I’m obsessively testing variations on my recipe to understand what is going wrong.

I’m still not sure, but in the process of experimenting I’ve made a lot of sourdough pancakes/hotcakes (excellent for breakfast with berries), some good banana bread, a tasty wheat/rye loaf — and the best basic San Fransisco-style sourdough of my bread-making “career.”

I discovered the multiple-exposure function on my camera and have had fun with that.

A bunch of supermarket tulips brought some much-needed floral inspiration as the weather has hammered my neighbourhood’s gardens.

In Whanganui last month I found three bags of dyed, carded wool for felting at $4 per bag. I couldn’t resist buying them, and have had a couple of attempts at wet-felting. I’m not at all happy with the results so far, but — like sourdough baking — I am determined to learn this skill, even if it’s only to make myself a scarf.

And in a moment of (probable) insanity; I decided to refurbish our dining chairs; bought from IKEA over 20 years ago.

I started out just thinking I’d smarten up an ugly, but comfortable $5 op-shop chair. Then I realised the colours I had in mind would work really well with our dining room furniture.

Somehow, I transitioned from that one little “paint-and-upholstery” job to making new seat frames for six chairs (bonus: I learned how to use a jig-saw); stripping and painting six grubby, waxed, wooden frames (plus one that was varnished); and upholstering seven chairs in turquoise and white striped canvas. Only one is completed so far — and boy have I learned a lot from it!

Not captured in the photographic record; I’ve also read more than usual (fiction and non-fiction); and completed the first assignment in a NZ Certificate in Horticulture course I signed up to. As you do …

Take a look at these lovely bloggers’ August posts:

Jude from Life at the Edge

Lani at Life, the Universe and Lani

I really should stop organising to travel at the end of a month; it plays havoc with The Changing Seasons scheduling.

I’m off to Sydney on Sunday to visit Sculpture by the Sea, a fantastic exhibition that is installed annually along the coastal path from Bondi to Tamarama Beach. With luck I’ll have lots of photos to share — but not until November.

Which leaves me wondering what I’ve done with this month.

Part of it certainly has been spent woolly-headed and lethargic from the absolute worst cold I can ever remember having. But that only accounts for about 10 days, and my photo folder for October is the smallest it’s been in ages. So however I have occupied my time, much of it obviously hasn’t seemed worth recording.

I’ve done a lot of sewing — mainly cushion covers to freshen up our living room.

I’ve baked bread, including a couple of variations on sourdough. 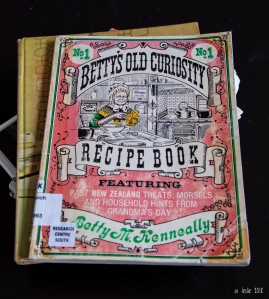 Published in 1980, this is a collection of recipes handed down from one generation of European settlers in NZ to the next. 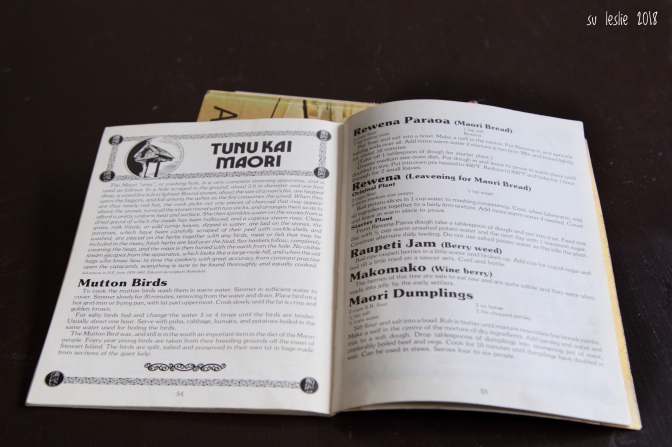 Maori bread is something I have been aware of for a long time, but knew nothing about. I found an old recipe, and was surprised to find it’s basically a sourdough, using boiled mashed potato mixed with flour and water to create the starter.

Neither wheat nor potatoes are native to New Zealand, and arrived with European settlers. Prior to that, kumara (sweet potato), yams, taro and ti pore (Pacific Cabbage Tree) were probably the principal sources of carbohydrates. Both were brought from East Polynesia by the country’s original migrants, probably around in the 13th century. As far as I know, pre-European Maori did not make bread.

Potatoes are easier to grow than kumara, and were widely adopted into the Maori diet. The use of potatoes in sourdough cultures is not unique to Maori, and was once widespread, but interestingly I had found no reference to it prior to finding this recipe. It certainly produced a starter culture much more quickly than the flour and water version that the Big T and I made a couple of years ago. My potato starter (which I actually made with kumara out of curiosity), was ready to use after two days, while our original starter took around two weeks.

The finished loaf was ok; a bit dense, and I forgot to salt the dough properly, but it was edible, and I’d certainly attempt it again.

One of those little philosophical moments …

I found this tiny, eroded shell in a little bag of rocks and other stuff tucked inside one of my son’s shoes. He had obviously planned to take the bag (and the shoes) home after a visit to us, but somehow they got left behind.

It reminded me of a time –long past — when we went to the beach together, bringing home assorted treasures destined to be forgotten.

From the outside, the shell is relatively smooth and uniform. It is only when the interior is exposed that we can see the complexity of growth and change. The passage of time does that.

Deb at The Widow Badass

Babsje at Great Blue Herons, who joins us for the first time. Please take a look at this great blog, including a second Changing Seasons post.

Little pieces of me

Jude at Under a Cornish Sky

Ju Lyn at All Things Bright and Beautiful

The Daily Post asked this week for photos that evoke growth.

For me, sourdough bread is perhaps one of the purest examples of how natural growth processes can be utilised to create something sustaining and delicious.

Flour and water are combined, and left as a food offering to the yeasts and bacteria that exist all around us. Over time, and with extra food, this mixture grows sufficiently in bulk and strength that with the addition of yet more flour and water, the resultant dough can be kneaded and proved and ultimately baked.

Learning to bake sourdough bread has been one of my projects for the last couple of years. With every completed loaf, my knowledge and confidence also grows.