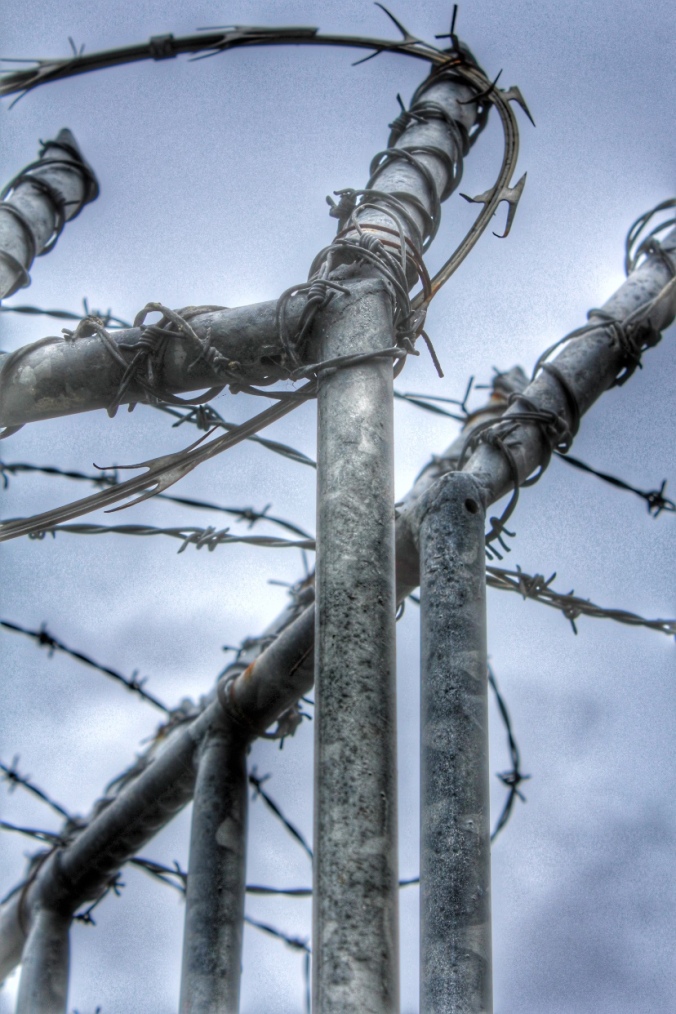 For too many people, looking up means seeing not the blue sky, but the fences and razor wire. Image: Su Leslie, 2015

Why do we say things are “looking up“ when we mean they’re getting better or improving? (www.threfreedictionary.com). And what about “onward and upwards”, “on the up and up”? These also carry the the notion that “up” is good, progressive, better.

I can’t find the origin of this idiom but I’d like to know, because it seems to me that for too many people things are anything but “looking up.”

Not for young graduates like my son’s friends, trying to pay off student debt on their minimum wage jobs and struggling to enter the careers they believed a degree would offer. Nor the families living in over-priced, substandard rental accommodation, or in a relative’s garage, or in their car. (1)

Things certainly aren’t looking up for those whom life has dealt a blow that could be softened — at least temporarily — by welfare benefits that previous generations voted for. A recent report suggested that those seeking state welfare assistance in New Zealand are de-humanised and terrified by the system and those who administer it. (2)

And if things are bad for people whose metaphorical outlook is bleak, spare a thought for those who physically live behind fences and razor wire. Those who are kept in detention centres and refugee camps — and kept out of those countries where the notion of things “looking up” still seems possible.

We are living in troubled times; the world has more displaced people than ever before (3). Inequality is increasing (4) and with it social discontent. Mass shootings and terror attacks have become a regular occurrence, xenophobia informs decision-making and huge numbers of us feel alienated and disenfranchised.

And yet there is so much good in the world. Whenever I begin to feel the weight of large-scale misery pressing down, I find good people doing what they can to help. From the myriad of local mums, business people and biker gangs making lunches for kids that otherwise go without, to the volunteers of Community Fruit Harvesting, collecting and processing unwanted fruit and vegetables to share with those who need it. From the large organisations like the Red Cross and the Salvation Army, to the people of Te Puea Marae in Auckland who opened their doors to homeless people this winter.

I don’t believe that helping those in need should be a matter of charity. I believe that it is the role of elected governments to ensure the basic welfare of their citizens. But philosophy doesn’t fill stomachs or put shoes on children’s feet. So until there is a substantial shift away from the politics of ne0-liberalism, we must give our thanks for the goodness of ordinary people and organisations whose hard work means that, for some at least, things are “looking up”. 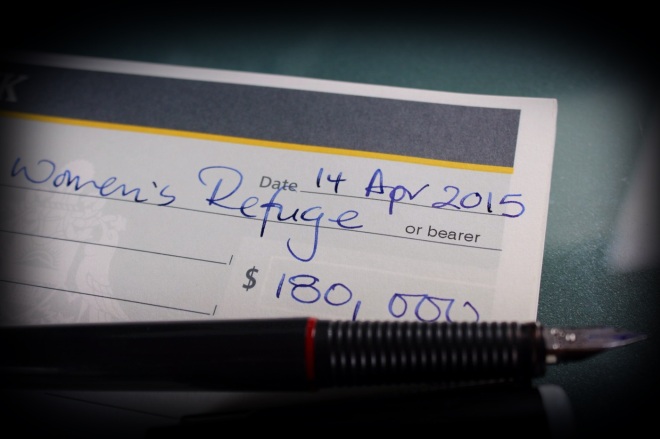 Last night the proceeds from NZ Sculpture OnShore 2014 were given to Women’s Refuge NZ. I’m so proud to have been part of this wonderful event, which has raised $180,000 for Refuge’s work. Photo: Su Leslie, 2015.