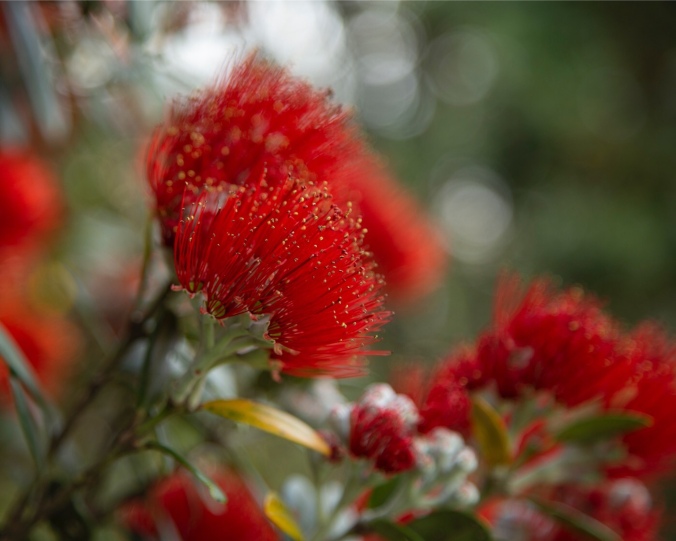 For many here in Aotearoa New Zealand — especially those of us living near the coast — the arrival of summer is heralded by the flowering of the Pohututkawa tree (Metrosideros excelsa).

A member of the myrtle family, pohutukawa grows easily along the country’s coastline, often spilling precariously over cliffs. Incredibly strong roots anchor its spreading, silver branches that twist and gnarl at impossible angles. It is long-lived, providing generations of beach-goers with shelter and shade where sand meets bush.

And between November and February (but particularly in December and January) you will find pohutukawa trees all over the country covered in a profusion of (generally red) flowers.

Early European settlers “adopted” the pohutukawa as the New Zealand Christmas tree, using wreaths and branches to adorn homes and churches during the Christmas festivities. Today, pohutukawa-themed Christmas cards, gifts and tree ornaments are sold in shops around the country. 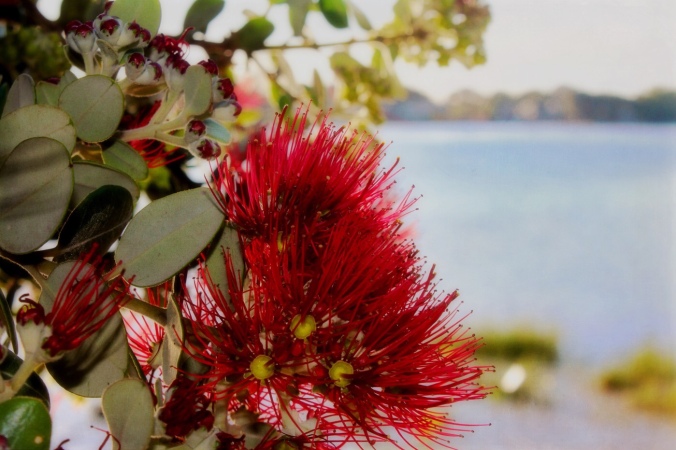 The pohutukawa is a common symbolic element or icon in much of my nation’s culture. One of our foremost playwrights, Bruce Mason, wrote a play called The Pohutukawa Tree, but it is from another of his works — The End of the Golden Weather — that I draw these words

“The red is of a fire dying at dusk. The green faded in drab. Pain and age are in these gnarled forms, in bare roots clutching at the earth, knotting on the cliff face, in tortured branches dark against the washed sky.”

— from The End of the Golden Weather, a play by Bruce Mason.

Each year, on Christmas Day, a scene from The End of the Golden Weather is performed on Takapuna Beach, near my home. Each year, several several hundred Aucklanders turn up to see this — free — performance. That too has become a part of what summer means in this tiny corner of the world.

Constant rain and high winds in the last couple of weeks have left many flowers looking utterly bedraggled, particularly the magnolia, camellia and rhododendron flowers I so often photograph.

The most colourful find on yesterday’s walk were the pohutukawa trees, with their mix of bright green, red and bronze leaves. Perfect for another double-exposure experiment!  This shot was a bit over-exposed, but I rather like the sof palette of greens and almost apricot shades that resulted.

Pohutukawa is evergreen, and grows in coastal areas, often on the most precarious of cliffs. Long overhanging branches provide welcome shade on beaches and wonderful hiding places for childhood games.

It is a tree I photograph again and again — in all seasons.

An inexplicably swollen ankle has kept me a bit house-bound the last few days, so I’m recycling a pohutukawa photo from last week — albeit with a bit of Xmas bokeh. 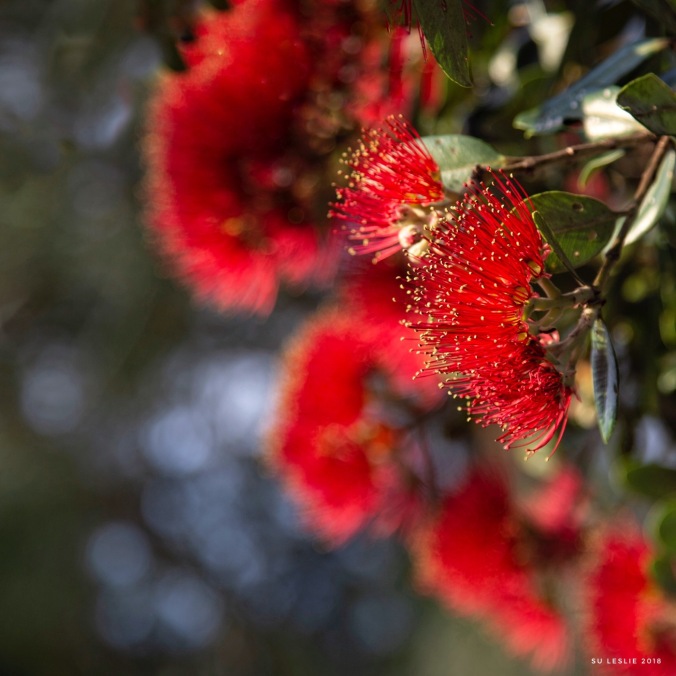 Auckland has become a more colourful place with the flowering of pohutukawa trees all around the city. 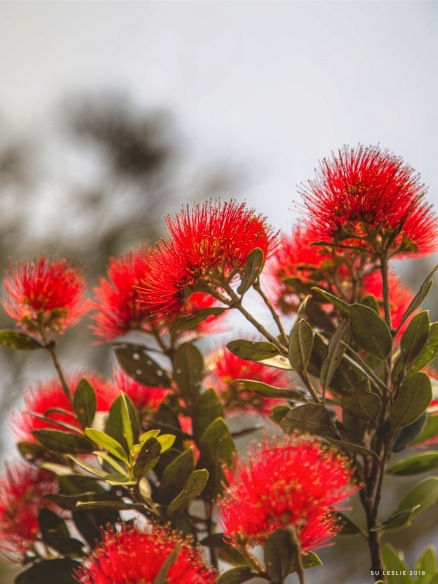 Pohutukawa, or New Zealand’s native “Christmas tree” is beginning to flower along the Coromandel coast, wreath ini many of the small beaches we’ve visited in crimson and green.

Pohutukawa-like flower: but blossoming in May? Image: Su Leslie, 2017. Edited with Snapseed and Stackables

I saw several of these plants at Westhaven Marina recently and can’t figure out whether they are out-of-season Pohutukawa, or a similar species that flowers (much) later.

Either way, they provided cheerful little bursts of red along the marina’s boardwalk.

A contribution to Sally D’s Mobile Photography Challenge at Lens and Pens by Sally.