The Bath House in Rotorua was opened in 1908 as a spa where visitors could “take the waters” from the city’s extensive network of thermal springs. It was the New Zealand government’s first major investment in tourism.

This rather grand half-timbered building, built (for some reason) in the Elizabethan Revival style, was designed by Dr Arthur Stanley Wohlmann — a balneologist (expert on medicinal springs) appointed by the government to advise on the development of New Zealand’s thermal areas into spa-style resorts.

In 1947, management of the building was transferred to the government’s Health Department, and the facilities continued to be used for medicinal purposes until the 1960s.

In late 2016, the building was assessed as not meeting New Zealand’s new earthquake standards, and closed indefinitely.

“The sky grew darker, painted blue on blue, one stroke at a time, into deeper and deeper shades of night.” — HARUKI MURAKAMI

There are worse metaphors for my month than the Big T’s chainsaw.

There have been days when I’ve effortlessly cut through “the big stuff”, and others when it’s felt like my plans and good intentions have been chopped off at the knees.

But overall, we managed to tackle some jobs that have been over-long in the “too hard” basket, and reward ourselves with a few escapes from our normal landscape.

I’ve already posted shots from most of these trips, (very poor planning) so here are a some from a long-delayed visit to The Lighthouse (see below), an exploration of the walk and cycleway under Mangere Bridge (we weren’t even sure it existed), a visit to the beautiful Northland beach at Whananaki where T and I once camped, and a few days in Rotorua.

A highlight of that trip was the Redwoods Tree Walk; 28 connected suspension bridges, up to 20 metres off the ground in the midst of the redwood forest. I hate heights — but it was fabulous. It is open until 11pm, and the forest is lit up at night, but there were massive queues the evening we considered it, while we had the daytime walk almost to ourselves.

The Lighthouse, and The Cloud; downtown Auckland. Image: Su Leslie 2019

The Lighthouse, a sculpture by Michael Parakowhai. Image: Su Leslie 2019 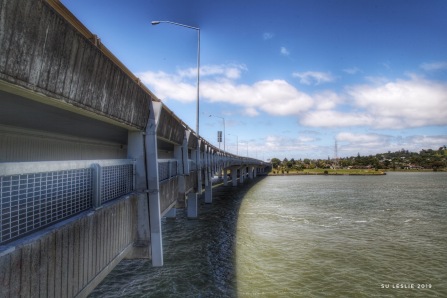 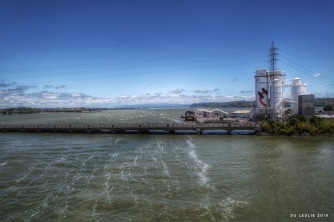 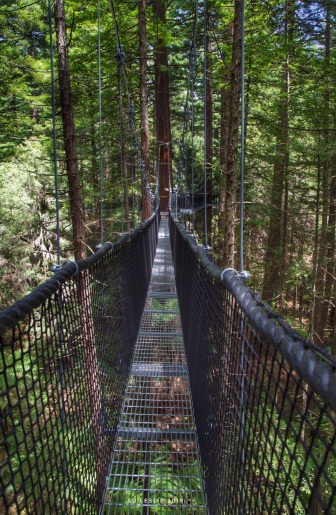 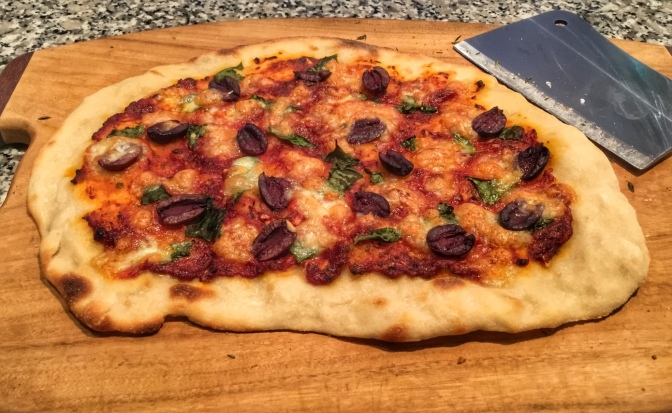 It hasn’t felt like a particularly creative month. I messed around with a design for a tote to hold a couple of bottles of wine, on the basis that this (suitably filled) would make a good gift. The design is good, but I’m struggling with execution.

In the kitchen, my sourdough obsession has produced a few attempts at pizza / pizza bread. I’m definitely getting there, and T is happy for me to keep experimenting!!

Deb at The Widow Badass

Jude at Living on the Edge

The Lighthouse is a work of public art by NZ sculptor Michael Parakowhai. It’s sited at the very end of Queen’s Wharf in the CBD and from the outside, is a 1:1 scale replica of a New Zealand “state house” of the 1950s. The interior is completely open and contains clustered neon lights and a large scale statue of Captain Cook (there is an identical sculpture in the New South Wales Art Gallery).

It’s an interesting work — with the interior defying expectations. I didn’t manage to capture any particularly good interior shots, but there is one in this article. And uou can read more about it here.

No water, no life. No blue, no green. — Sylvia Earle

The 2016 earthquake centred around Kaikoura in the South Island, left its mark on many other parts of New Zealand.

Seven hundred kilometres away, the much-loved (and much-photographed) 1908 Bath House in Government Gardens, Rotorua, was deemed unsafe for use and closed for earthquake strengthening.

The processes of working out how strengthening can be done, how long it will take — and how much it will cost — are underway.

Meanwhile, there are no visitor voices in the rather lovely galleries, and no footsteps on the parquet floors.

We’ve had a couple of days in Rotorua so the Big T could explore the mountain bike trails. I’ve enjoyed relaxing in the hotel pool and a few walks in Government Gardens, where the hydrangeas are looking particularly lovely.

Not sure if these rafters could be described as ebullient– or just a little bit crazy.

The next waterfall is seven metres high. 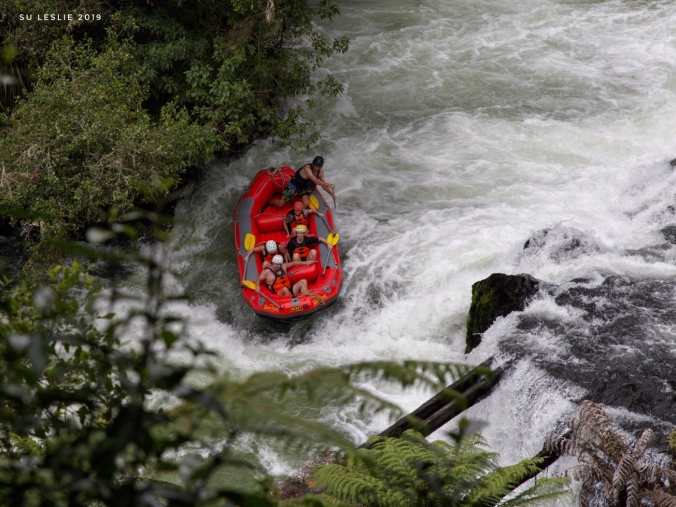 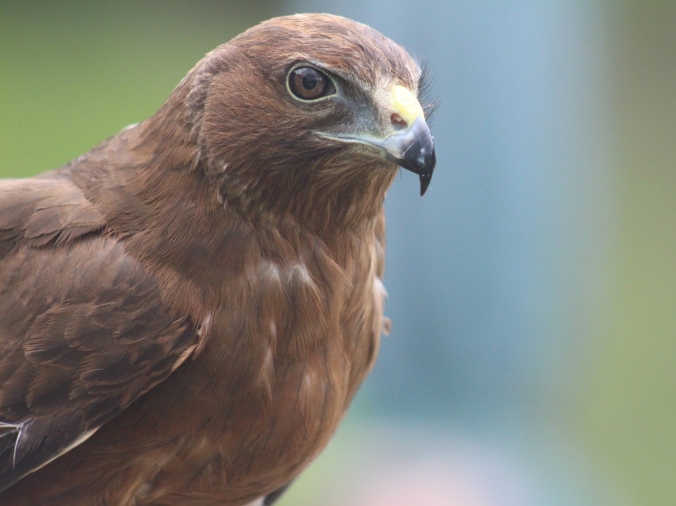 The Wingspan Birds of Prey Centre in Rotorua has been on my list of places to visit for a while, and last weekend the Big T and I finally got there.

The Centre was established out of a commitment by a group of individuals to preserve the native NZ falcon, or Karearea, and other threatened native birds of prey.

As well as aviaries for the birds currently being bred, rehabilitated or permanently cared for, the Centre also has a fascinating collection of falconry items in its museum. 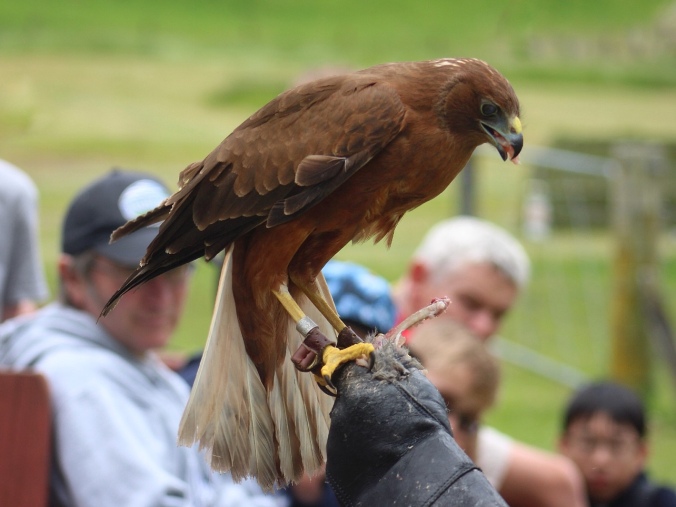 A snack while the audience assembles. Hisan the Karearea eating rabbit held in the falconer’s gauntlet. Image: Su Leslie, 2016 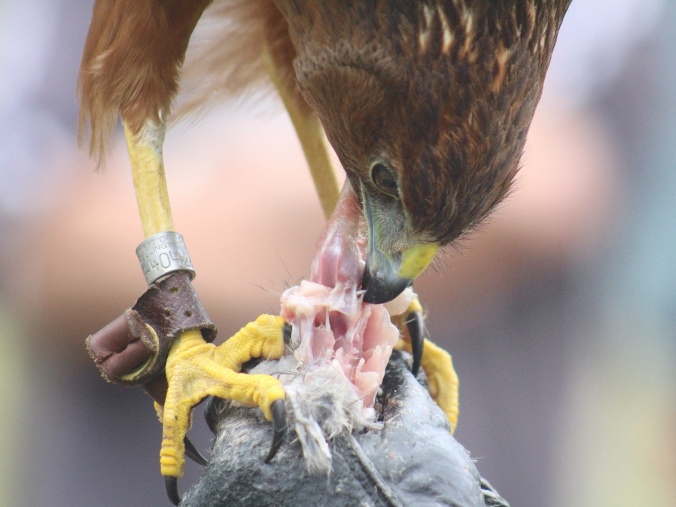 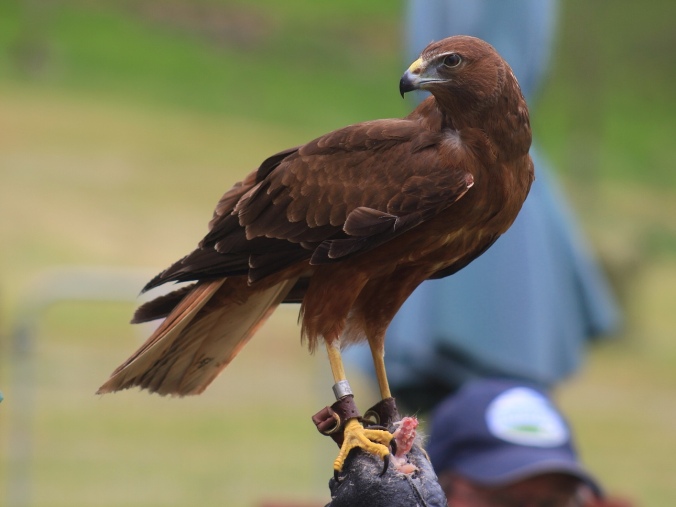 But the highlight of a visit to Wingspan is watching a flying display. I confess I’m always dubious about attractions that seem to involve “performing” animals, but at Wingspan, the focus is on the bird’s welfare and development. We were told that Hisan, the juvenile Karearea we saw, is a good candidate for release into the wild. But for that to happen, the Centre staff need to be sure he has the skills to survive. So while Hisan’s afternoon flight sessions are highly entertaining for watching humans, they are vital to his development and well-being.

An explanation to the audience before Hisan was released. Image: Su Leslie, 2016

We were told that Hisan’s flights were becoming longer and taking him further from “home” — signs of his maturity. It meant quite a lot of waiting around for us, but I felt much better knowing that Hisan’s welfare wasn’t being compromised for our entertainment. 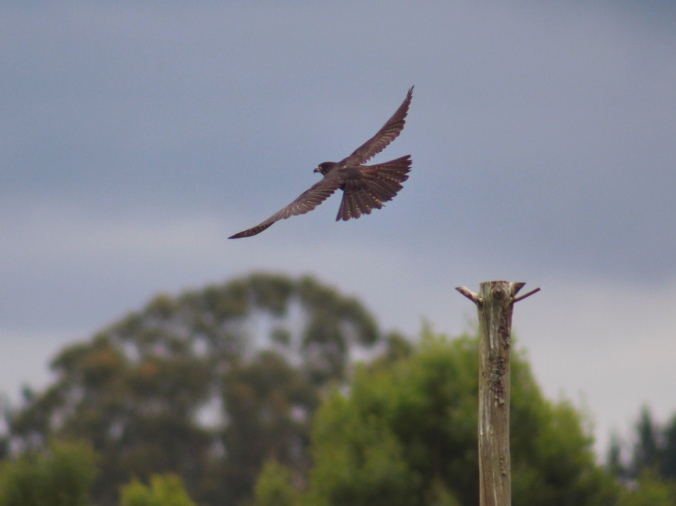 Heidi, Hisan’s trainer, swung a feathered lure on a long rope to attract Hisan back to her. His skills are developed by intercepting the lure while it’s airborne.

When Hisan returned to his trainer, everyone in the audience was able to don the gauntlet and experience this beautiful bird up close.

Baiting the gauntlet with meat for Hisan. Image: Su Leslie, 2016

Both the Big T and I are still raving about our afternoon at the Wingspan Centre. We loved that it provided a really down-to-earth, interesting visitor experience in an environment that is fundamentally about conserving a beautiful native species of bird which is threatened by loss of habitat and other forces.

News Flash: in the last couple of days, Hisan has made his first kill — an important milestone on the road to his release into the wild. 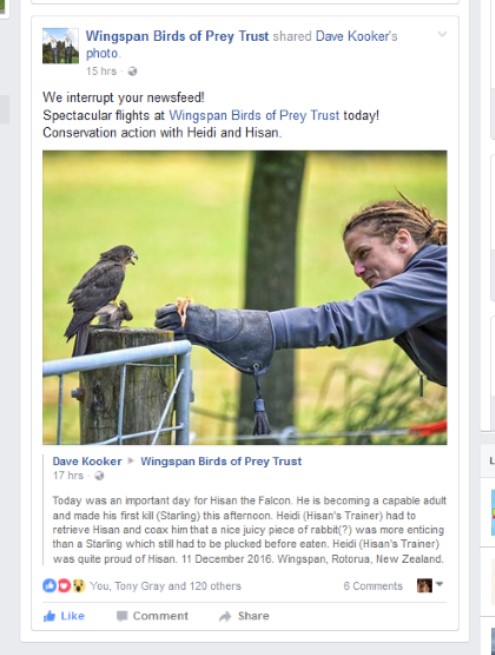 The Wingspan Birds of Prey Centre is at: