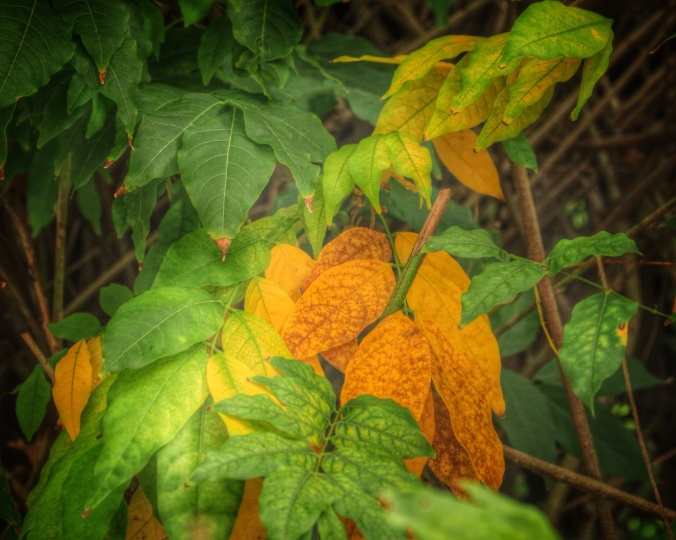 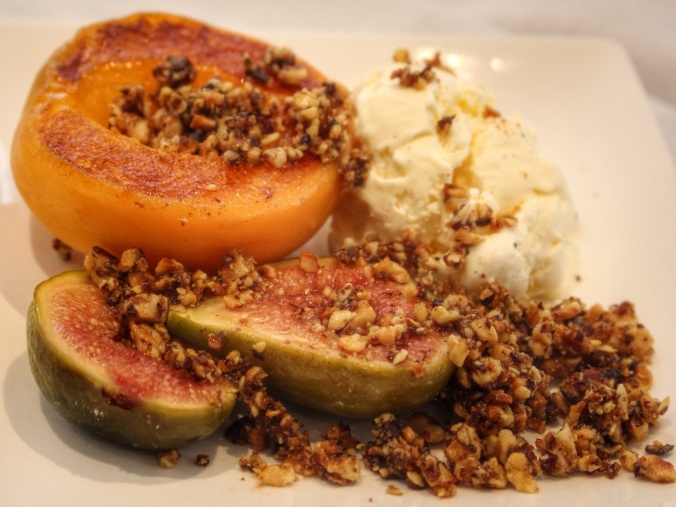 I hadn’t intended to post another recipe for Cardinal Guzman’s Changing Seasons challenge, but this one arrived — fully formed — at precisely 3.18 this morning (I checked). As I’m not often woken by ideas this tasty, it seemed silly not to make the dish and share the photo.

Golden Queen peaches and figs are both in season here, and while I have to buy the peaches, I’m lucky enough to have a fig tree that is bearing about four fruit a day at the moment.

I poached both the peach half and the fig halves in a syrup flavoured with stem ginger and lemon jest, then popped the peach — cut-side down — in a frying pan to caramelize it. If I were making this as a proper dessert (rather than an experiment), I would roast the peaches to soften and caramelize them in the same process.

The crumb topping was made of finely chopped hazelnuts toasted in a frying pan with a bit of butter.

The icecream was Kapiti vanilla bean.

The Big T was my (surprisingly willing) taster, pronouncing it pretty yummy. Since I asked for constructive feedback, he said the poaching syrup needed more ginger and the crumb a bit more flavour.

I’m working on MK #2 for the boy-child to try later.

The Changing Seasons is a monthly challenge hosted by Cardinal Guzman. There are two versions:

Summer is gone, and with it the enervating humidity, leaving Auckland refreshed by cooling breezes. Like the morning mists which briefly shroud Greenhithe and nearby Hobsonville, this season will also pass. Each morning I am awake early enough to walk solitary in the stillness of these mists feel like a gift. “The moment has arrived.”

Like the half-light that exists between night and day, there is a time in relationships when love is neither thriving nor quite gone.

Drive  — the title track of singer Bic Runga‘s first album captures the feeling of longing to hold on to what is good, even as darkness closes in.

Drive is also one of the songs used in the play Daffodils by Rochelle Bright. Daffodils is a love story told as much through its use of Kiwi music as theatre.

Here is a clip of Drive, from Daffodils with Colleen Davis performing.

And here is Bic Runga performing the song.

Sometimes sense stimuli coincide in a way that such a way that a moment of magic is created. In this case, a morning walk in the park, with Ryuchi Sakamoto as my soundtrack. 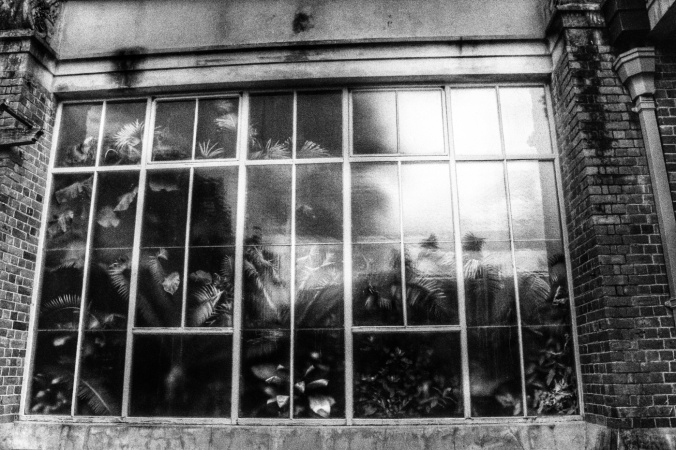 View obscured. Plants in the tropical house at the Auckland Wintergarden, seen from the outside. Image: Su Leslie, 2016. Edited with Snapseed.

I seem to be developing an obsession with the Auckland Wintergardens. More particularly, with the interface between flora and architecture, interior and exterior, exhibition and concealment. A few weeks ago, I found myself pondering the display of exotic plants for human entertainment, or:

the human impulse to capture nature and to use our considerable intelligence and skill to maintain species of life in artificial environments made to simulate their own, in order that we may enjoy those species on our own terms. (Nature Confined)

Yesterday, driven from the pavilions by a busload of very noisy tourists, I found myself thinking about the plants pressed up against the building’s exterior windows. From inside, these are the wallflowers, the backdrop to carefully managed displays. They are the hardest-to-reach and the least likely to be stars of the show.

The pavilions themselves are showing their age. Built almost 90 years ago, the Wintergardens are like a once-majestic theatre — still putting on a dazzling show for the visitors, but behind the scenes it’s all starting to look a bit faded. 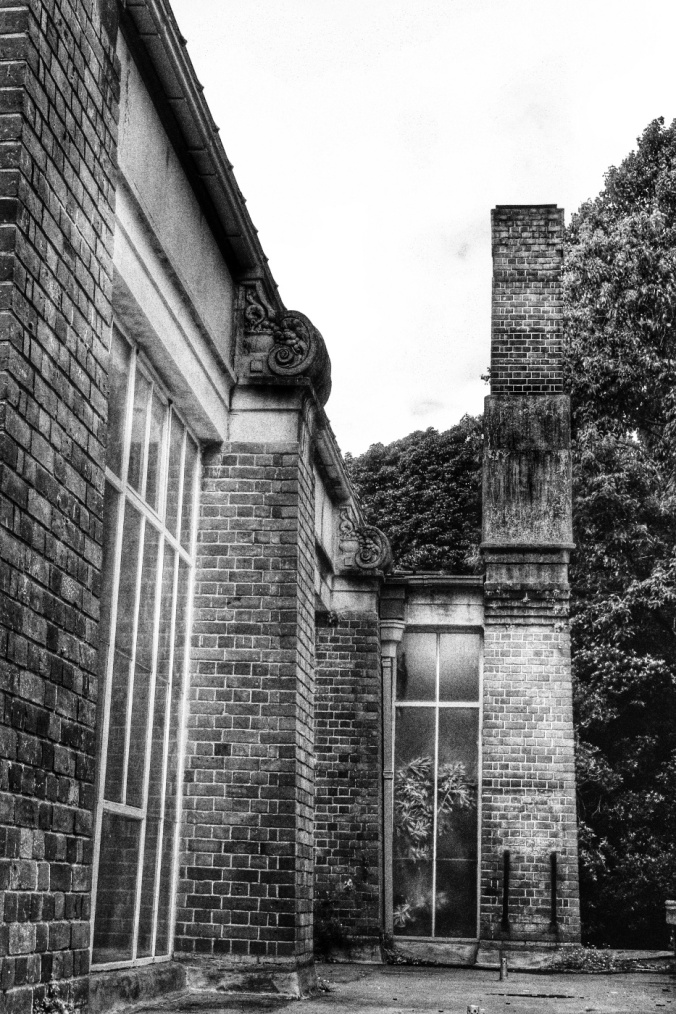 ’round the back. Behind the tropical house, Auckland Wintergarden. Image: Su Leslie, 2016. Edited with Snapseed.

I’ve always rather liked the theatrical metaphor for life, drawn from the sociology of Erving Goffman (1922-82). The language of theatre makes sense to me as a way of understanding everyday life (performance, audience, script, props, costumes — even the distinctions between front-of-house and back-stage).

And while we each enact personal performances, we do so within our society, where politics, culture and morality are themselves performed. In this social theatre, some people, groups and ideas are given starring roles. Others are marginalised; relegated to the chorus, to non-speaking parts, or even denied the stage altogether.

As both audience and players, it is our responsibility to understand the staged and constructed nature of social life, and not to forget those squeezed to the fringes — only visible if we really look.

This post was written for Sally D’s mobile photography challenge at Lens and Pens by Sally.

Marlyne has exhibited these chandeliers collectively as “And the Dance Goes On”, often hanging them in trees to be blown in the breeze. I filmed this clip one evening as the wind was beginning to pick up (heralding the arrival the next day of a terrible storm). Scottish folk band Capercaillie provided the soundtrack;  Dr MacPhail’s Reel.

A series of diptychs featuring Bollywood film couples against the backdrop of some iconic west Auckland coastline line the walls of the Waitakere Contemporary Art Gallery. These paintings by Bepan Bhana are both a fun, colourful juxtaposition of painting styles, and a serious commentary on the commercialisation of landscape. In a country like New Zealand where tourism is a significant source of revenue, the relationship between landscape as natural heritage and economic resource is a complex one.

Frankie Goes To Bollywood is showing at Te Uru Waitakere Contemporary Art Gallery until 15 May.